But we had Haypath Park and that was pretty damn good.


I have a vivid mid-sixties recollection of my father at the kitchen table with the Long Island Press reading an article about plans to build a park on Haypath Road.  Almost like literary foreshadowing, I sensed this was a more important nugget than whatever was on the first few pages of the paper that day.


Carved out of the woods between three housing developments, our park immediately became the beating heart of a generation of local kids.  Two baseball fields, a basketball court, tennis courts, handball and some scattered diversions for younger children.  From the day the gates swung open, it rendered the question, “what are you doing after school?” obsolete. 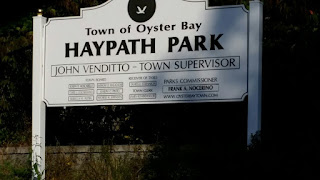 In my decade or so tethered to the park, I tried just about every game known to man.  We played football, baseball, softball, nok-hockey and tennis.  If someone showed up with a soccer ball, a Frisbee or a golf club; that became the game of the day.  Half-field, full-field, halfcourt, solo or teams.  As kids, we found a way to take a piece of equipment and make it in to a game.


In our teen years, the basketball and handball courts served as the park’s nerve center.  While many of us moved easily between the two areas, they also provided something of a natural division.  The basketball court sat a bit higher on the park’s upward slope and functioned in the tradition of the New York playground … choose sides, half court, winners out, count by ones, whoever has “next” replaces the losers.  Like any court worth its salt, the better players were known by nicknames and we played with and against guys called Tip, Fudd, Nuke and TNT.


Our generation didn’t talk a lot of trash on the basketball court, but it had its own colorful soundtrack.  Those waiting on the sidelines doubled as play-by-play announcers.  I can still hear a friend channeling Marv Albert, loudly introducing a smallish, non-descript player as “the 6’8”, 240 pound forward out of BOCES”.  At times, the park had its own language – colorful and crass – like a timeout punctuated by “I have to take a Manny” (a nod to NBA/ABA journeyman Manny Leaks).


Truth be told, the slope wasn’t the only thing separating the basketball and handball environments.  There was also a cultural divide.  The basketball court was a destination separate from the park.  A lot of guys came only to shoot hoops and play a few games before heading home.  The handball court was different.  A little grittier.  Cigarettes smoked and passed.  Guys and girls.  And nobody came just to play handball.  Carved in to the hill below the blacktop, the handball court felt more like a home than a destination.


Basketball was a game; handball more of a lifestyle.


Despite that divide, there was little hostility.  We all seemed to understand that the park was bigger than any of us.  Enduring life lessons were learned through countless days sharing space.  Value true friends.  Respect people.  Try new things.  Laugh.   Treasure a place that is yours; wherever it may be.


One of the park’s true oddities, when seen through modern eyes, was the complete absence of adult supervision.  We were totally out of touch with our homes for hours on end, but I honestly don’t recall either of my parents ever setting foot in the park.  The sight of anyone’s father or mother would have been a major curiosity.  Such a thing is unimaginable today.  Our parents assumed we were safe in the park, and we were.  There were adult employees, of course.  Over the years, I best remember “Uncle Gene”, a mayoral type who supervised several town parks and introduced himself to everybody when he visited; Frank, an authority figure who we generally heeded; and Chris, a younger supervisor who was always willing to jump in to a pickup game and – despite standing about 5’5” – had a nasty one-handed fallback jumper that could cause problems for an unsuspecting defense.


As we began to “age out”, we still used the facilities occasionally, but began to show up after dark.  Dozens of older teens congregated at “the wall” outside the park's entrance to talk and fracture a few laws before heading out for the night.  There was no special reason to be there; except that it was our place and we weren’t yet ready to leave it behind.


Haypath Park was our social network.


I remember stopping by the park on a sunny afternoon a few years back.  I pulled my car in and was shocked to see absolutely no one.  Empty courts.  Empty fields.  Empty swings.  I walked around a bit and saw plaques noting the deaths of Frank and Uncle Gene. The neighborhood children, no doubt, were home chatting on their iPads or taking part in a “playdate” that was too contrived to involve a public swing set.  Though they likely play travel soccer, lacrosse or baseball, the local teens would be at a loss if someone dropped some sports equipment at their feet and simply said, “Have fun.”


Today’s children are lucky.  I like social media and modern technology.  And I wish my childhood had included travel sports in sparkling facilities.  Computers, iPhones and the rest have opened the world for this generation in a way we couldn't have dreamed of.


But they’ll never know the joys of the park and that is a loss they can’t fathom.


The greatest hour I ever spent on a basketball court came at Haypath Park.  My teammates were not very good and our opponents were local football players with a high degree of athleticism and a bit of a swagger.   Anyone who played a lot of basketball, has had many games where they had the hot hand.  It’s much rarer when your whole game clicks and you are truly “in the zone”.  Every shot drops.  Every ball bounces your way.  Every move is fluid and every hunch pays off.  For me, that day came in a game of full court, 4 on 4 in a summer Sunday drizzle.  I spent an hour “in the zone” and led a decimation of our betters in a “first to 25 baskets” game.


When I came to the park the next day, my opponents saw me and began telling their friends about my game.  For years, when I saw those guys, I got a handshake and an air of respect.


I suppose today’s young people do things that make them proud.  Somebody takes a picture (or a selfie) and the reward comes in the form of “likes” on Facebook or Instagram.  I get that.  Validation is important.


But I can’t imagine that a couple of hundred “likes” can match the feeling of walking in to the park you regard as a second home and hearing people talk with reverence about something you did.  Each of us had our days or our moments in the park that made other people repeat what they’d seen.  It’s likely we all remember the way it made us feel.  It was a place-based validation that seems unavailable to a generation without a place; a generation that only goes where their parents take them.


Decades later, I’m most likely to come across my park friends on Facebook.  It’s an ironic intersection of worlds that is not lost on me.  I am too old to hang out in the park and too young to ignore the social media revolution.  But I am happy to see old friends – even if “seeing them” and “talking to them” are euphemisms for sending a few words their way via the internet.  I have no doubt that social media makes my life richer.


I also believe the current generation of kids will grow up with fond memories of You Tube or Snapchat as their “place”.  Their memories will be no less sincere than mine.


But they will never understand what it feels like when for one day, in one place, nature conspires to visit upon us the stuff of legends.   That is why too much of me – too much of all of its denizens – will always be in Haypath Park.  There is nothing technology will ever imagine that will replace that.

May 06, 2010
Last week, my wife mentioned that one of the kids in the neighborhood was having a birthday party on May 6th. I responded by telling her, “That’s Willie Mays’ birthday.” I don’t know why I said it. I certainly knew she was not interested in this information and was unlikely to send a Hallmark greeting to the “Say Hey Kid”. If I had to guess I would say she wouldn’t even recognize the name of the greatest baseball player I ever saw. But this tidbit from the back of an old trading card was so easily accessible in my aging mind that it had little choice but to come out of my mouth. And it’s just the beginning of my problem. The things I have filed neatly in my brain would shock many people. Poems and speeches recited to long-ago classmates. Breakfast cereal commercials. Election results. Names of teachers, newscasters, disc jockeys and sitcom characters. Anecdotes for every social occasion. Boxes and boxes of baseball card factoids. A few years back, Sports Illustrated's Ste
Post a Comment
Read more

November 11, 2014
The other day, I came across a tidbit in the news.   It said it was the birthdate of former movie star Hedy Lamarr; she would have been 100 years old.    To call Hedy Lamarr’s life fascinating would be to damn it with faint praise.   The word to describe her journey has yet to be invented (Larmarresque?). She was much more than a beautiful woman, but beautiful she was.   Ms. Lamarr’s look was truly timeless.   Her publicity shots from the thirties and forties could be released, unaltered, today and cause the same buzz they did then.   Fortunately for her, though, the term “buzz” was not yet in vogue and she flew somewhat under the radar through a series of scandals that – if seen today – might cause the Twittersphere to explode.   She left Germany in 1933 after stirring up controversy for depicting the first female orgasm in non-pornographic film history.   She was married at least six times.   She essentially gave away her 12-year-old adopted son and never spoke to him agai
Post a Comment
Read more

March 16, 2017
As a person of limited substance, I have always been drawn to both light verse and baseball.   In the first grade we were asked to recite a poem in front of the class.  Amidst various renditions of Roses are Red , Jack and Jill , and Twinkle Twinkle Little Star , I offered up Ogden Nash's  Lineup for Yesterday: An ABC of Baseball Immortals --  all 26 stanzas and 104 lines. In this popular poem - first published by SPORT Magazine in 1949 and seen HERE  - I had discovered the masterful confluence of my two prime interests.  I was hooked young.and never lost my love for this unique work.  In fact, more than 50 years removed from that classroom, I still recite it to myself when I need to pass time waiting for the water to boil or the timer on the microwave to run its course.  With that in mind - and desperately avoiding whatever task actually needed to be done - I attempted an homage to Mr. Nash with a modern "Lineup" comprised of the "Immortals" of
2 comments
Read more