January 20, 2013
Earlier this week, I was coming out of Penn Station with two friends. One of them bent to pick up an old football card that was wedged against a wall. He looked at the name, shrugged his shoulders and passed it on to me. The photo on the card was that of a long obscure New York Giants running back named Randy Minniear.

The name instantly took me back to September, 1969; a memorable time in American history as well as in my own life. The news had been dominated by Apollo 11, the war in Vietnam and the debauchery at Woodstock.  As my friends and I began fifth grade, however, September of '69 was when the promising summer of the Mets had transitioned in to an Amazin’ Fall. 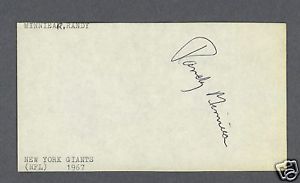 The only glitch was that my right hand was in a plaster cast to aid the healing of a broken thumb. Worse yet, it was the second edition of that cast. My original break had not healed properly – I had ignored doctor’s orders to stay away from afterschool baseball and basketball – and my orthopedist had to re-break and re-cast the troublesome digit.

That uninsured wrinkle resulted in more closely monitored inactivity but it also prodded my father to leverage his friendship with Alex Webster into an invitation for me and my clean white cast to visit C.W. Post College to watch an early season Giants workout. When the practice ended, I stood near the entry to the locker room and many of the players dutifully stopped to sign the freshly hardened plaster. For that day at least, it made me feel lucky to have been injured.

I got the stars - Fran Tarkenton and Homer Jones signed right next to each other. My favorite players - Spider Lockhart, Joe Morrison and Don Hermann - all stopped and scribbled. Little used running back Frenchy Fuqua, later a flamboyant part of the Steelers dynasty, obliged; as did Rich Kotite, then an anonymous bench player but later one of the most reviled head coaches in New York; and pass rusher Fred Dryer who would go on to star as T.V.’s Hunter. I got the big guys like offensive lineman Willie Young and the little guys like placekicker Pete Gogolak.

I got at least one good story. Star receiver Aaron Thomas explained he could not sign as he held to a superstition that those who signed a cast would be the next to need one. He did, however, politely scare up a scrap of paper and sign that.

I got sympathy. I got smiles. I got pats on the head. Finally, I got the signature of the very last man off the field. Randy Minniear signed my cast right next to the broken thumb itself before disappearing and leaving the field clear of New York Giants.

I shared that story as I held the 44 year old football card in my hand and I thought I was finished. But one of my friends innocently asked, “How’d you break your thumb?”

Before hearing that question, I thought I was smiling fully from the memories of that special day. But – like the Grinch’s heart – my smile grew to a place it had never been before and I spoke a single word that I may not have spoken aloud for thirty years.

Neither of my companions had grown up in New York and each looked at me blankly. “Salugi,” I repeated. “The greatest schoolyard game of them all.”

Obviously, they did not share my enthusiasm or my overwhelming sense of nostalgia. I did my best to explain salugi to little avail. Apparently you had to be there. But we were there. Every fair weather recess for years we enthusiastically played the game that embodied the cliché “boys will be boys”.

Since then, I've consulted several websites and learned the game we knew – in which two huge teams of boys ran wild in a frenetic and pointless effort to retain possession of a red gym ball – grew from a simple game of “keep away” where a few tormentors tossed around the hat of a victim until he was able to get it back. I was shocked to find it mentioned in a 1964 edition of Sports Illustrated where reporter Gilbert Rogin sagely observed, “I don’t really know how to spell … salugi. We never had occasion to write it down.”

Writing it down, in fact, might have been sacrilegious. The beauty of salugi at recess was that it was everything that school and the classroom were not. The rules were flexible; bordering on non-existent. There was no preparation, no schedule and no pre-meditation of any kind. Someone would simply grab the red ball, shout, “Salugi” and the game was on. Dozens of boys came running and morphed in to two teams with no rhyme, reason or consistency. Shouting out was encouraged. Complaints were ignored. The composition of the teams evolved as players routinely switched sides in hopes of getting the ball thrown their way. The games never produced a winner or a loser; despite unbridled competition. But we all went back to class feeling better than when we left.

In the days when our mothers patched our pants rather than replace them, a hole in the knee earned in the cause of salugi was a badge to be worn with pride; even if Mom didn’t see it that way.

With that in mind, during a spirited salugi session the first week of fifth grade, I closed in on my friend Tom Lynch in an attempt to wrest the ball from his grip. As he quickly delivered a pass toward a perceived teammate, I raised my hands and jumped only to have the ball catch my ten-year-old thumb just so and snap the bone in two. I finished the game without a thought, but later that afternoon took a discolored and badly swollen thumb to the doctor and left with the clunky plaster cast.

I remember vividly, and painfully, that, after the first break and then the second, I was finally cast-free and transitioned to an aluminum splint. Unfortunately, on the very first day of that freedom, I crashed my bicycle leaving me with a third break, a new cast and a few stitches for good measure. I still can barely bend that right thumb and it hurts more than my other aging joints on cold or rainy days.

I’ve thought a lot this week about how one simple afternoon of salugi caused me so much pain and so much pleasure in the weeks between the moon landing and the Miracle Mets. I’ve also tried in vain to remember exactly when we abandoned salugi for more traditional games at recess. I’ve even tried to recall the last time I picked up a red gym ball.  Each time, I’ve smiled at the memories.

Truth be told, my only real regret all these years later is that I didn’t get to Tom Lynch a millisecond earlier which would have allowed me to trade Randy Minniear and his New York Giants teammates for one fleeting moment of salugi glory.

May 06, 2010
Last week, my wife mentioned that one of the kids in the neighborhood was having a birthday party on May 6th. I responded by telling her, “That’s Willie Mays’ birthday.”

I don’t know why I said it. I certainly knew she was not interested in this information and was unlikely to send a Hallmark greeting to the “Say Hey Kid”. If I had to guess I would say she wouldn’t even recognize the name of the greatest baseball player I ever saw. But this tidbit from the back of an old trading card was so easily accessible in my aging mind that it had little choice but to come out of my mouth.

And it’s just the beginning of my problem. The things I have filed neatly in my brain would shock many people. Poems and speeches recited to long-ago classmates. Breakfast cereal commercials. Election results. Names of teachers, newscasters, disc jockeys and sitcom characters. Anecdotes for every social occasion. Boxes and boxes of baseball card factoids.