January 01, 2012
As a year winds down, most newspapers, television news shows and websites run a recap of “notable deaths” from the previous twelve months. The pieces are bittersweet as they invariably contain reminders of terrible tragedy, but mostly include names of those who have lived long and accomplished lives. Hearing a familiar name more likely produces a smile than a tear.

Another characteristic of these “Obits-in-Review” is the fact that they tend to uncover a few deaths we missed during the year. Not a year goes by that I don’t discover that someone died in February, June or September by reading one of these end-of-the-year recaps. 2011 was no exception; but this time the name I had missed was someone I personally knew and admired.

Gil Clancy was not a household name, but he earned a measure of fame first as a trainer and manager of world champion boxers and later as a terrific color commentator paired with Tim Ryan on CBS boxing telecasts. According to Newsday – but unbeknownst to me – he passed away March 31st of natural causes at the age of 88. 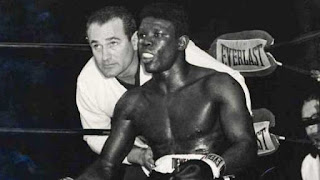 A native of Rockaway Beach, Gil was a running buddy of my dad. They first met when my father traveled to the Queens Riviera in search of the kind of good times young men have always sought. They remained friendly into adulthood, propped up by a third member of their crew – “Moose” Moorehead – who, as chief usher at Shea Stadium, literally held the keys to my childhood kingdom.

As pivotal as Moose was to my social existence, his pal Gil figured in many of my rites of passage. As a small boy my father occasionally took me to Clancy’s Gym – an indescribable world overflowing with testosterone, violence, nasty smells, and multilingual obscenities. He let most of the fascinating adult content pass without comment to his young son, but also tended more heavily toward profanity himself in that setting; something I found both unsettling and undeniably bonding.

I remember overhearing a private conversation between my parents inspired by one of those trips to the gym. I was in bed, but my room was only feet from the room in which they were standing. I didn’t fully grasp it at the time, but my father was hinting at the homosexual leanings of Gil’s greatest champion, Emile Griffith (see Dan Klores’ brilliant documentary Ring of Fire: The Emile Griffith Story). He was genuinely confused by what he saw as a juxtaposition of two incompatible worlds. My mom was more evolved, but seemed reluctant to set him straight.

In the mid-sixties, we went to “the fights” at Sunnyside Garden; an old fight club located at Queens Boulevard and 45th Street. The scene was right out of every Hollywood boxing story ever made … big dreams soaked in blood, sweat and smoke. The most familiar fighters were characterized by the old-timers either as “stepping stones” - a term of respect implying that a promising young fighter must get past them before being ready to move up in class - or “tomato cans” – fighters with more guts than ability who fought only for the payday it earned them. I mostly remember the shouts of “la cabeza”, the stale popcorn, and a strange ice cream treat that was sold in slices wrapped in cardboard. Of course, I also remember snapping to attention every time Gil climbed in to the ring with a fighter.

As I grew older, Gil rarely disappointed. In college, he provided tickets to a few fight nights at Madison Square Garden and the Nassau Coliseum. When I thought I might like to work in sports, he introduced me to John Condon and Bob Arum. Knowing I was also interested in writing, he sat with me in his backyard and generously shared his insider’s recollections of the events leading up to the ring death of Benny “Kid” Paret at the hands of Griffith; one of the most dissected and controversial events in boxing history.

I eventually recognized him as a man of substance who stood out in his chosen industry. He held multiple degrees from NYU to augment a common sense view of the world. While he earned a good living, he displayed none of the trappings of wealth so regularly flaunted in the boxing business. In fact, my father often insisted he “still had his First Communion money”. He lived his whole life in the modest Malverne, Long Island home he and his wife bought when they first left Rockaway.

His name alone proved valuable to me. My association with such a boxing luminary was enough to win me tenuous approval from the working-class father of one prospective girlfriend despite my being a hirsute and arrogant faux-radical. And, as a young professional, I attended an exhibition of Ferdie Pacheco’s art and impressed more seasoned colleagues when Gil, who was seated with Vicki LaMotta, called me over to his table to say hello.

On other occasions, the simple mention of his name pre-qualified my credibility with the likes of Billy Packer, Al McGuire and a bevy of sports journalists.

He was a good guy and a good guy to know. I was sorry to read of his death, though a little more research uncovered a bout with dementia; an unfitting end for such a man.

There were other “notable deaths” to which I had some personal connection. Geraldine Ferraro was also a colleague of my dad. As a college student, I ran several errands for Ms. Ferraro – then a fairly anonymous congresswoman – between Capitol Hill and her Forest Hills district. I liked her immensely, finding her warm and intelligent in the manner of a favorite teacher. The Newsday list also included a local businessman and a Nassau County judge whose names I remember from many stories at our kitchen table.

But, there was something else I noticed for the first time this year. Along with those nostalgic names from my parents’ lives, there were more and more names from my own – a former professor of mine and several older contemporaries from my early professional days were included in Newsday. The national list included Steve Jobs, Smokin’ Joe Frazier and Clarence Clemons; names that belonged to me more than my folks.

I suppose it’s inevitable that, with each passing year, this list will become less relevant as a nostalgic link to my parents and more a record of my own aging and dwindling generation. Perhaps the “notable death” list will stop being something I look forward to reading and become something I dread.

But the 2011 list still brought a smile to my face and inspired youthful memories. In a few turns of the page, I recalled the likes of Elizabeth Taylor, Duke Snider, Harry Morgan, Jackie Cooper, Sherwood Schwartz, Kenneth Mars, Anne Francis, and Andy Rooney – all through the eyes of my parents and grandparents.

And I got to say goodbye to one of the good guys. Better late than never.