The Baseball Blogs Part II: The Curse of Julio Franco and Other Musings

April 29, 2011
In celebration of a long-anticipated Opening Day, I've confined this month's blog topics to the subject of baseball.

The Mets won 148 games and lost 105 in the season and a half the indefatigable Julio Cesar Robles Franco graced their roster. They are 286-297 since.

Franco began his major league career in 1982 and remained active until 2007. Along the way, he played for seven different teams (two of them twice) and wore six different uniform numbers. He routinely played winter ball in his native Dominican Republic and also played a few regular seasons in the Japanese and Mexican Leagues during three separate sabbaticals from MLB. In essence, he played year-round baseball for 25 years. Remembered best as a utility man, he was once a star middle infielder batting .341 and scoring 108 runs in his best season and driving in 98 in another. More importantly, he seemed to love the game the way fans imagine they would if they had the talent to play. 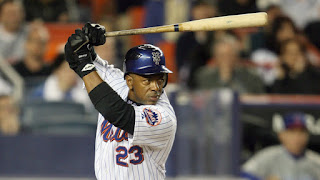 In 2007, Franco was in his second season as a popular member of the Mets. At 49, he was already the oldest legitimate position player in baseball history and had hit nearly .300 since returning from the Mexican League at age 41. Every time he stepped on the field he seemed to set some obscure record as the oldest person to get a hit, steal a base, hit a home run, etc.

He had captured the hearts of New York and the imagination of baby boomers everywhere as he seemed destined to play Major League Baseball at age 50. ESPN’s Dan Patrick joked that it had reached the point where “he should no longer be permitted to retire.”

But on July 15th 2007, the Mets suddenly decided he was unwanted and gave him his unconditional and unceremonious release to make room on their roster for Lastings Milledge. Julio Franco would not play big league baseball at 50. After a brief stop in Atlanta he finished the season in the low minor leagues. The following year he celebrated his milestone birthday playing for Quintana Roo in the Mexican League.

Is it possible that The New York Metropolitan baseball club had angered the gods? By disrespecting Franco , had they actually disrespected the game itself? The Franco-less part of 2007 included an epic Mets collapse unrivaled in baseball history. Things have scarcely improved since then.

Could it be that their braintrust failed to recognize that baseball karma always exacts its toll?


It amazes me that so many baseball broadcasters, reporters, players and executives still believe that runs scored early in a game are less important than runs scored later in a game. A marginal high school mathematician could easily prove this to be false with a single sheet of paper and one minute of your time. Moreover, since the beginning of major league baseball, the team scoring first wins about two-thirds of the time. Yet almost nobody regards a first inning RBI single as terribly important.

Likewise, I find the media and public embrace of sabermetrics to border on ridiculous. The discipline is meant to be used as a predictive tool for baseball executives, not as flawed science to give Cy Young Awards to guys with 12 or 13 wins. I much prefer the old coaches adage that, “you are what your record says you are”.


One of the unavoidable truths around Major League Baseball for nearly a decade has been the indisputable superiority of the American League. It has had better teams, better players and better depth by any reasonable measurement.

The superiority of the so-called Junior Circuit has been so prevailing that it is tempting to assume it will always be so. For that reason, it will be interesting to watch this year’s interleague schedule with a more analytical eye.

Though the media made little mention of it, the 2010 season began to show some trending back toward equality. The National League finally won an All Star Game and took home the World Series crown, but those events reveal little about either league’s dominance. However, interleague play – which includes 252 games and every single player and team – is a genuine barometer of competitive balance. With that in mind, the next few months may reveal if last season’s trend is sustainable or simply a blip on the screen.

Here are the quick facts:
• Between 2006 and 2009, the AL won every season series and averaged a lopsided edge of 144-108. True dominance. Even more indicative of the gap is the fact that over that period, the average year saw more than 9 of the 14 AL teams win its interleague season series; a strong indicator of top-to-bottom superiority.
• Last year, the final tally was a significantly narrower 134-118 in favor of the Americans. But only 6 of its 14 teams had winning records this time around lending some credibility to those who claim the American League is splitting in to “haves” and “have nots”.
• In games played without a DH, the National League actually posted a healthy 69-57 advantage. Since most experts agree that American League teams – with rosters constructed to include a DH – will always have a bigger home field advantage, these numbers would appear to be significant to the Senior Circuit.

If we’re looking for causes, we might start with simple player movement. Stalwarts of the AL rise to supremacy are retiring, slowing down or switching leagues. Five years ago, players like Roy Halladay, Cliff Lee, Johan Santana, Manny Ramirez, David Ortiz, Jim Thome and Derek Jeter were among the league’s brightest lights; all future Hall of Famers in their prime. Today, some are National Leaguers, some are finished and others have lost a step or two. That natural progression has not had the same degree of impact on the National League precisely because the NL did not have as many great players.

The AL’s best rookie, Rangers closer Nefi Perez, was arguably the league’s only outstanding first year player. But even he drew none of the “oohs and aahs” of the NL’s twice-in-a-lifetime arms of Stephen Strasburg and Aroldis Chapman. Throw in terrific first seasons from NL pitchers Madison Bumgarner, Jaime Garcia and Mike Leake and it’s easy to see why some people feel this was a rookie class for the ages.

And it’s not just the rookie class, but youth in general. Only 3 of the American League’s top 25 RBI men were 27 or under last season. 11 of 25 National Leaguers were on the younger side of that cutoff.

Of course, this could all be a mirage. It stands to reason that younger players would have more opportunity to excel in a weaker league. Maybe the narrowing of the interleague advantage is an anomaly.

But it might be a trend and its definitely something to watch as the season moves along.


I admit that I'm a twitter-follower of several current athletes. Despite the never-ending entertainment provided by their tweets, the best sports quotes still come from old ballplayers.

A despondent Dick “Dr. Strangeglove” Stuart after being struck by a line drive while playing first base: “I must be getting old. I used to be able to get out of the way of those.”

Casey Stengel referring to 20-year-old Greg Goosen: “In five years, he has an excellent chance of being 25.”

Hank Greenberg, a first-class carouser, explaining why he stayed home Saturday nights in the era of Sunday doubleheaders: “There are definitely quite a few girls worth an 0 for 4, but I never met a woman who was worth going 0 for 8.”

Nomar Garciaparra on his early influences: “My idol was Bugs Bunny because I saw the cartoon where he played every position himself with nobody else on the field. Now that I think of it, Bugs is still my idol. You have to love a player like that.”

Here’s to a great season ahead. Does anyone know if they’ve scheduled a Julio Franco Bobblehead Day at Citi Field?