I Have a Dream. Why is Glenn Beck in it?

August 28, 2010
“I have a dream that one day this nation will rise up and live out the true meaning of its creed: We hold these truths to be self-evident that all men are created equal.

I have a dream that my four little children will one day live in a nation where they will not be judged by the color of their skin, but by the content of their character.

My friend, Cal Ramsey, awakened to a ringing phone on August 28th, 1963. Wilt Chamberlain was calling to say he thought they should go to Washington to hear Martin Luther King speak. Cal agreed and, after a hastily arranged flight, they were among a sea of people privileged to hear Dr. King tell a still-segregated country about his dream. I once asked if it occurred to him that day that he might see an African American president in his lifetime. Cal, who was born in Selma and has lived the bulk of his life in Harlem, let a small laugh and a faraway look in his eyes stand as his answer. 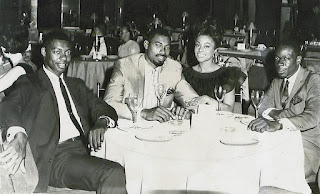 Having spent much of the past two years working with Cal on an oral history of the early days of professional basketball, I have been privy to many other firsthand tales of America’s civil rights movement. The sport of basketball played a role in that movement and its early players wear their individual roles with pride. John Isaacs and the pre-war New York Rens were content to let exceptional play challenge the routine indignities they faced below “The Cotton Curtain”. Willie Naulls spoke with remorse of widespread lynchings in his native Texas while he studied on the relatively progressive campus at UCLA. Satch Sanders and his Boston Celtics boycotted a sold out game in segregated Louisville, KY. The march from Selma to Montgomery included Oscar Robertson's wife, Yvonne, but the Big O chose not to accompany her because he didn't trust his own ability to remain non-violent under the racially charged circumstances.

These and dozens of other incidents were related to me with decades-old emotion and through a few scars that have not fully healed. I also heard of rewarding personal encounters with civil rights titans like Jackie Robinson, Rosa Parks, Dr. King, Ralph Bunche, Malcolm X, John McLendon and Harry Edwards.

Believe it or not, nobody mentioned Glenn Beck.

Yet today – on the anniversary of the keynote to Civil Rights – Beck will stand where Dr. King stood 47 years ago and, in his words, “reclaim the Civil Rights movement”. The statement is almost too bizarre to challenge with intelligent questions.

When did you have claim to it in the first place?

From whom are you “reclaiming” it? Dr. King? Ms. Parks? Cal Ramsey, Oscar Robertson and other descendants of slaves who triumphed over the worst kind of mistreatment? The brave men and women who died for the dream?

What will you do with the Civil Rights Movement when you reclaim it?

I admit that I am not a Glenn Beck fan. I am firmly in the camp of Jon Stewart who described Beck as, “a guy who says what people who aren’t thinking are thinking”. But I recognize that many, many good Americans do not share my views. In fact, some people for whom I have great respect admire the guy and support his brand of activism. Moreover, I actually believe he serves a useful purpose in a free society and I support his right to stage his event at this particular location.

I’m not upset with Glenn Beck. He is little more than a television character playing to type. I’m upset with us. I believe with all my heart that America should demand more of itself than this. We are a country built on social activism. We need to see the difference between true activism and reality television dressed up to look like news.

It’s my true hope – my own much more modest dream – that the American people will drop our partisan rhetoric long enough to demand more of ourselves. I hope more and more citizens - regardless of their political bent - are jolted enough by the juxtaposition of Dr. King and Mr. Beck on the evening news to see the difference between the heroic course of human events that occurred on this stage 47 years ago and the made-for-TV history being contrived there today.

When we see the news reports of Beck’s monument to himself, I hope we will recognize Fox News’ equivalent of ESPN’s X-Games. Rather than reporting news, Fox is choosing to first make the news it reports. That is not social activism or a protection of our civil rights. It is propaganda and nothing more.

As much as any chapter in our rich history, the triumph of civil rights – to whatever degree individuals believe it has been achieved – reveals America as the country it promised to be. It was a victory built on the intense personal strength of millions of citizens. Its success was and is dependent on our national character. Glenn Beck will not reclaim the civil rights movement today or ever. I don’t know what today will bring, but I do know that.