Would Harper Lee Have Signed With the Miami Heat?

July 14, 2010
I admit it. I was one of the millions who tuned in to The Decision, the clumsy and uncomfortable ESPN program by Lebron, of Lebron and for Lebron. A genuine basketball wunderkind, Lebron James was so convinced of his exalted place in our consciousness that he was certain his business decisions should be televised live (he was, of course, proven correct as the amateurish one-hour show registered a higher rating than his final playoff game). I witnessed the announcement that he would play for Miami and then saw the ridiculous display of narcissism dissolve in to an equally bizarre talk radio-fueled hysteria.

The insanity did not subside until I read a small piece in the New York Post noting a significant literary milestone. It said To Kill A Mockingbird, Harper Lee’s classic Southern novel, is celebrating the fiftieth anniversary of its publication this year. 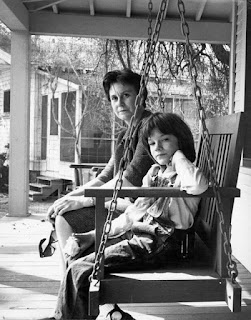 Mockingbird was one of my mother’s favorite books. She read it the year it was published. I had just reached my first birthday and my three older siblings were all under 7. Where she found the time or energy to read anything remains a mystery to this day.

When I was 11, I saw the film version and was haunted for years by Robert Duvall’s brief but powerful turn as Boo Radley. My late night terror inspired by the Finch’s mysterious neighbor was more than balanced by Gregory Peck’s noble portrayal of Atticus. His presence in the film is so quietly enormous that I am still inclined to rise from the couch in my den when my television eavesdrops on the courtroom balcony to hear the Reverend telling Scout, “Stand up, Miss Jean-Louise. Your father is passing.”

When I finally read the novel in high school, I immediately shared my mother’s love for its timeless themes, ambling child’s narration, and authentic (if occasionally vulgar) dialogue. By the time my daughter was assigned the book, it was more than 45 years old, but still rang true to her.

Three generations of my family were joined by this simple tale of one little girl’s summer vacation. I’m not sure there’s another cultural touchpoint the three of us shared as deeply.

I’ve long been fascinated by the book’s author. A dignified woman from southwest Alabama, Harper Lee had a tale worth telling and told it with exceptional skill. Before publishing her own masterpiece, she collaborated on Truman Capote’s “nonfiction novel” In Cold Blood. Critics of her day floated the theory that her childhood friend, Capote, might have been Mockingbird’s actual author; they reasoned the work was too good for a “nobody”. Ironically, modern scholars now question to what extent Ms. Lee may have authored In Cold Blood.

Regardless, the two books are among American Literature’s handful of best examples of marrying greatness and accessibility. Lee’s work hangs over hundreds of subsequent novels of the genre like one of her hot and humid Alabama afternoons. Capote’s book revolutionized journalism as much as literature. They were both on her resume by the time she was 34. The literary world was surely hers for the asking. But she did not ask.

Instead she walked away gracefully to a life lived on her own terms. I believe it was the ultimate act of self-confidence. Not ego, but true inner confidence. She was never the fiercely reclusive Salinger – weighed down by accusations of paranoia and dark eccentricity. Nor is she the bourbon-soaked and suffering Dylan Thomas who famously cited Baa Baa Black Sheep as his life story while lamenting that he had “no more bags of wool” to share with his readers. She did not even retreat to country life as many assume. In fact, she divides her time between her birthplace and New York City. Everyone recognizes her in the former, almost no one in the latter.

She stepped away at the height of her “brand” and, by all indications, she has pulled it off.

With his future placed before him on a silver platter, young Mr. James chose a different path than Ms. Lee. He wants more. Not just more money, but more “art” in the manner of seam-splitting passes, thunderous dunks, lockdown defense, dominating wins and championship rings. He knows how high he set the bar, but wants to push it even higher. While he has certainly chosen the road more traveled, his is an honorable and understandable decision. Very few elite performers see the limitations of their greatness or even ask what else their life might be. Most, like Lebron, need to know exactly how great they can be. They recognize the finite window of time they are given and are driven to accomplish all they possibly can – even if they’ve already produced the equivalent of a classic novel. They are far more likely to stay too long than to leave too soon.

Likewise - The Decision notwithstanding - it is foolish to think Lebron’s generation invented the runaway ego. While not as attractive as Ms. Lee’s inner confidence, great artists from Mozart to the aforementioned Thomas were as quick to publicly celebrate their abilities as King James is. More to the point, the towering James would easily take a back seat to the diminutive Capote in a “preen off”.

Still, the juxtaposition of the two prodigies led me to imagine the unimaginable. Suppose Lebron had chosen to walk away.

He is a child of Akron, OH. His love for his hometown is as genuine as it is inexplicable. Imagine for a minute that he told Jim Gray he was going to leave basketball behind to live quietly in Akron. After all, he had already accomplished more than he could have dreamed and made more money than he could ever spend. Imagine he borrowed a page from Harper Lee and simply went home.

Of course, he did not and probably could not. Even if he wanted to, it’s hard to believe a star of his magnitude could simply go away in this day and age (see Williams, Ricky). Where would he go to avoid the public and the media?

But this wasn’t always so. In 1961, Pulitzer Prize in hand, Harper Lee went away. She knew what she wanted and what she did not want and the world respected her wishes. I will always wonder what she might have produced had she “stayed”. I’d like to know if she had a “bar raiser” within and what it might have meant to three generations of my family. Still I can’t help but admire the decision she made and the dignity with which she has lived her quiet life.

I also look forward to seeing Lebron James play basketball for another decade or so. I hope he made the right decision for the right reason. It’s not hard to imagine telling my grandchildren about Lebron over some future breakfast table. But I truly can’t wait for the next generation of my family to discover an amazing summer in Maycomb County, Alabama and for my grandchildren-to-be to ask me about the unique woman who kept that time alive. That will be a tale worth telling.