May 06, 2010
Last week, my wife mentioned that one of the kids in the neighborhood was having a birthday party on May 6th. I responded by telling her, “That’s Willie Mays’ birthday.”

I don’t know why I said it. I certainly knew she was not interested in this information and was unlikely to send a Hallmark greeting to the “Say Hey Kid”. If I had to guess I would say she wouldn’t even recognize the name of the greatest baseball player I ever saw. But this tidbit from the back of an old trading card was so easily accessible in my aging mind that it had little choice but to come out of my mouth.

And it’s just the beginning of my problem. The things I have filed neatly in my brain would shock many people. Poems and speeches recited to long-ago classmates. Breakfast cereal commercials. Election results. Names of teachers, newscasters, disc jockeys and sitcom characters. Anecdotes for every social occasion. Boxes and boxes of baseball card factoids. 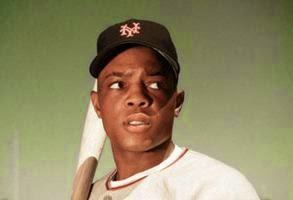 A few years back, Sports Illustrated's Steve Rushin described an ailment common to the sports-obsessed. “My mind is a lint trap retaining only useless fluff,” he wrote. “So I know why .406 is important but not why 1066 is.”

I can relate to Mr. Rushin – but only to a point. I, too, can’t hear the digits 4-0-6 without calling to mind Ted Williams; the last man to hit .400 in the majors. But I do know why 1066 is important (if you don’t, ask the next Brit you see). The truth is I know lots of important things in addition to mounds of trivia.

Unfortunately it’s all becoming dated. My lint trap once caught just about everything, but it was installed half a century ago. Sometime during the end of the last millennium it became so full of fuzz it was barely functional – call it my personal Y2K crisis.

Even worse, I am certain the trap is un-cleanable. As I write this on the 79th anniversary of Willie Mays’ debut in the world, I could recite the birthdays of another 25 retired athletes without breaking a sweat. But I literally cannot recall which of the neighbor children is celebrating his big day.

It’s tempting to dismiss this as the normal aging process, but I don’t believe that’s so. My wife, for instance, has no lint trap at all. Her mind deals with the task at hand, holds on to the pertinent information as long as she needs it, then forever lets it go. Sure, she complains the process is not as efficient as it once was but the basic machinations haven't changed.

Her mind may be aging. I’m afraid mine is becoming obsolete.

I can name each actor who comprised The Magnificent Seven and all seven dwarfs. But which of the seven days the garbage goes out is beyond me ... Say the name of any one of 50 films released between 1965 and 1980 and I can instantly tell you in which theater I saw it and with whom. Ask me the name of a film I saw last week and I’m sure to draw a blank ... If there’s some call for an impromptu recitation of E.A. Robinson’s Richard Cory, I’m your guy. But which of those two Corys died last month? I’d have to look that up.

Worst of all, like Steve Rushin, the internal attic in which I store batting averages, uniform numbers, players-to-be-named-later and other sports minutia is completely full; crammed to the point where it can no longer be emptied and nothing new can be added. In other words, the 1969 Mets are safe but the current bunch will have to fend for themselves.

Therefore, in addition to being the birthday of my alltime favorite baseball player, I will heretofore recognize May 6th as the official beginning of my tentative but inevitable trip to obsolescence. It is especially fitting because the great and graceful Mays grew old quickly, gracelessly and painfully before my very eyes. If I sift through that attic just a bit, among the tape-measure home runs and cap-shedding dashes for home, my mind’s eye reveals the sad image of a pot-bellied, knee-damaged shell of my hero as he completed his glorious career in the unfamiliar uniform of the Mets.

In her waning years, my late mother told me that she often wanted to shout, “It’s still me in here.” Maybe Willie Mays had the same thought as he woke up this morning staring down his eighth decade. Not me; I’m nowhere to be found in here. There’s nobody inside me but broken down singers, authors, actors and ballplayers. There’s no sign of the guy who never met a Jeopardy board he couldn’t tame and functioned as his own low-budget Google before we even knew what cyberspace was.

From here on out, I’ll be spending a lot of time back in my heyday. It’s not a particularly sad realization. 1969 was a great year. The Miracle Mets. Men on the Moon. Our vague awareness of the goings-on at Woodstock (a teenaged neighbor took my sleeping bag on her journey to that piece of history). The things I know best will become less and less useful to the younger generation. That is the circle of life.

Between now and full blown senility, however, there is a dark place you can always come if you forget exactly when Miss Louise replaced Miss Barbara on Romper Room, the lyrics to the Great Shakes commercial, Jimmy Carter’s classic debate gaffe, the dozens of people who visited the castaways on Gilligan’s Island, or the results of 8 years of Little League games. You are certain to emerge littered with lint, but you might learn a thing or two while you're here.